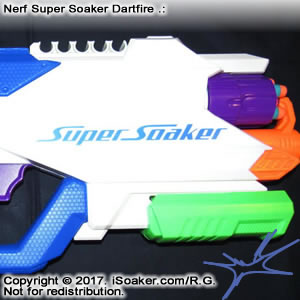 So far, for 2017, I have found some information on eight (8) Nerf Super Soaker models, none of which use any form of stored pressure (unless you want to count a garden hose water source as having stored pressure from the water tower). Of the piston-based water blasters that have output measurements in the iSoaker.com Database, the maximum output recorded for a pump-action water blaster was close to a 3x stream (almost 90mL/sec (3oz./sec)), but that was for something more closely-related to a syringe-type water blater. The typical pump-action water blaster streams seem to fall somewhere in the 1.5x to 2x (between 45mL/sec (1.5oz./sec) and 60mL/sec (2oz./sec)). While this may not seem too bad compared to various pressurized water blaster models, one must also consider that the duration of these streams last barely one (1) second with over half of the models tested having shot times of less than half-a-second! The output statistics presented on iSoaker.com are for the maximum stream output during the blasting phase. As such, when you take a full pump cycle into consideration, the functional output of a pump-action water blaster will be reduced in half or more depending on whether a particular model experiences pump lag or just has a stiff pump.

Some may argue that the large, syringe-type piston-based/pool cannon-type water blasters (e.g. Stream Machine or Water Blaster Water Cannon) can push much more water at respectable distances, comparable to mid-class full-elastic-bladder based water blaster. However, most of these pool-cannon-like water blasters do not possess an on-board reservoir, thus cannot be used very far away from a open water source. Moreover, such pool cannons performance depends on the strength of the user; as such, actual performance will vary. Of course, the thought of running with a fully extended larger syringe-type water blaster is also a recipe for potentially breaking it if one falls or drops it when stretched out.

The importance of output for a water blaster is important, but far from the only parameter that should be taken into consideration. The other major shortcoming with pump-and-shoot water blasters is that, by needing to pump-to-shoot, it is actually much more difficult to maintain a steady aim. Pumping requires the user to exert force, typically a compression force. This is achieved by holding onto the extended pump grip with one hand while the other holds a rear-grip area, then bringing one's hands closer together. To keep the nozzle of a water blaster aimed consistently, one needs to do several more arm-adjustments during the pumping process; in most cases, a user will simply allow the stream to waver slightly, but this lowers accuracy. For stored-pressure water blasters, though pumping is typically required to prime the blasters, the user's hands' on the water blaster during aiming and blasting do not need to move in most cases since pulling a trigger requires only the motion of a finger (or two). Moreover, if one's aim happened to be off, it is much simpler to release the trigger, re-aim, and blast again as opposed to stopping one's arm mid-pump, then re-priming the pump in order to take another shot.

Now, this isn't to say that there is no value to pump-action water blasters. Because of their simplistic operation, they make for great introductory water blasters when getting younger children interested in hosting or participating in water fights. As stream power is also affected by user strength, water fights between young children of similar ages usually means that none of the water stream blasts would be too hard or stinging and all participants should have fun drenching each other.

All that said, as previously known as Aquatechnology,

iSoaker.com was inspired by the power and performance of the Super Soaker CPS-series. This was the pure and simple reason that the legendary Super Soaker CPS 2000 was the first water blaster featured for the launch of iSoaker.com. These large water blasters of the mid-to-late 1990s truly raised the bar when it came to pure soakage. You knew your water blaster was good when its blast would outclass a garden hose. Sure, the garden hose user had relatively unlimited water, but if you could soak them from beyond their range with a comparable stream, you knew you could rule the water warfare battlefield!

iSoaker.com was born from the pure joys of soaking and sharing a great water fight with friends and family. It is time for iSoaker.com to return to its roots.

From a collection-viewpoint, I still may acquire various pump-and-shoot water blasters, but from a time and value viewpoint, I no longer plan to do any significant reviewing on a pump-action water blaster unless there appears to be something particularly unique or noteworthy about a new model. While there are benefits in having some pump-action water blasters available in one's own armoury, I do not expect their various performance levels to vary much. The major differences between pump-action models are mostly in their overall size, styling, and capacity with some variations in pump volume and output. In most cases, one can make a good guess on a pump-action water blaster's performance by looking at the size of the nozzle, relative size of the reservoir, and trying to determine the diameter and length of its pump stroke (volume can be estimated based on pump-rod diameter and length). When time permits, I'll try working on a general guide on how to make good estimates on how a pump-action water blaster will behave based on how the ones tested at iSoaker.com perform.

For now, after I write up a few more of these pump-action water blaster reviews, I'll go back to focusing on water blasters with greater performance. To me, that requires water blasters that utilize some form of stored pressure/power. Of course, given the current state of retail water weaponry, that may mean there are only a couple of new water blasters that meet my criteria, but I'd rather focus on the good or promising that dwell upon the mediocre.

Leave NO one dry! - iSoaker.com