Alright guys, you've been waiting for this a while, and I guess it's time for me to put this review up. As many of you know, there are two known versions of the all-powerful gun known as the CPS-2000 out there.

Some quick differences that you'll notice right away:

SEE UPDATE AT THE END OF THIS REVIEW! 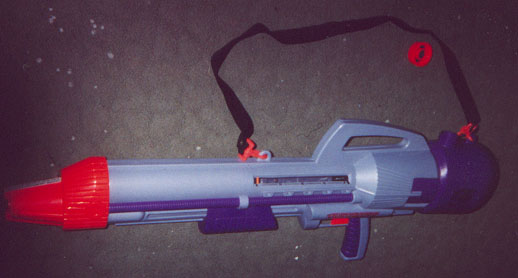 My MK2 CPS-2000 has an after-market strap made from a dog leash, because the stock one is not long enough for me. It also has a repaired pump handle, as indicated by the bolt through it. I would venture to say that the MK1's strap was not printed because the MK1 was still in limited release at the beginning of the summer. I'd venture this because this claim is bolstered by the fact that the MK1's pressure indicator is not printed on the plastic like the MK2's. It is instead a clear sticker on the top of the gun.

For those of you wondering how big the MK1's pressure guage is, take out your current CPS2000. If your pressure indicator does not go past the grey, raised plastic molding below it, you have a MK2. The MK1's pressure indicator goes past this point by about an inch. It is shorter than the grey plastic "midpoint" peice of the purple hose that runs the length of the gun by a fraction of an inch. If you do not have a CPS-2000, take out your 2500. The MK2's pressure guage is the exact same length as that gun. The pressure guage on the MK1 almost reaches the grey plastic "midpoint" on that weapon as well. The length of the pressue guage is not an indication of the pressue tube itself. I have not taken the MK1 apart, as I am a great believer in the "if it ain't broke, don't fix it" rule, however the external peices suggest no difference inside.

What can be different is the actual material that the pressure tube is made of. This seems to be the difference with these two. It seems as though the MK1's pressure tube material was made to expand further than the MK2's. Why did they change it to a less-expanding tube? I am not sure, but it may have to do with the durablility of the rubber. The MK2's rubber is proabably thicker, like the 2500's, and is thus able to last through more expansions and contractions. 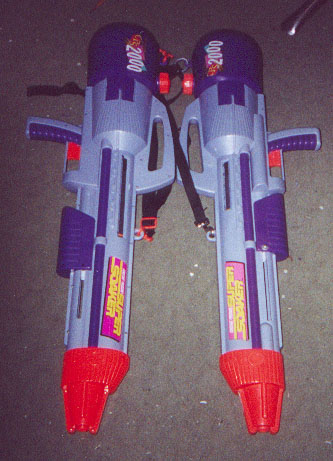 In a side-by-side comparison of the two guns, the MK1 and the MK2 bear a VERY close resemblance to each other. The only way to tell the two of them apart from a distance is to figure out which side holds the stickers. Right side, MK1, left side, MK2.

For the part you're REALLY waiting for, the power comparison, I am afraid I do not have any numbers at this time. As a general rule, I haven't had a reason to learn my guns by numbers, but rather by how they look, feel, and by a real-life observance of how they act and range out. The guns themselves are VERY comparable. The MK1 has only a slight advantage in the area that it shoots for a fraction of a second longer than the Mk2. The MK1 feels as if it has more power, it gives a more notable kick, and gets a lot of water to the target in a short amount of time. Rangewise, the MK1 has a slight advantage, giving an extra estimated 3 feet of distance.

But for those of you who MUST go by the numbers, look for an update that contains numbers.

UPDATE 9-6-2001 WCChrisReid of Aquatica provided more information about his two CPS-2000's. Neither one of his came with strings attaching their caps to the gun, and neither of his straps had the Super Soaker branded strap. In addition, he pointed out that both of his 2000's had stickers on the right side. This would be an indication of both a left and right-handed gun produced of the same model. Thanks Chris!

Leave NO one dry! - iSoaker.com